Steve Mann,
University of Toronto
On the Identity Trail
May 2005

How to cite:
Equiveillance: The equilibrium between Sur-veillance and Sous-veillance, Steve Mann, ACM (Association of Computing Machinery) CFP (Computers, Freedom, and Privacy), 2005 May 12.

Forensics:
For forensics (proof of creation date), the date it was written and published on the Web was 2005 April 7th; see below for forensics:

This is the text of the final pre-conference workshop topic, that leads into the Opening Keynote Address (a panel discussion) for Association of Computing Machinery (ACM) Computers, Freedom and Privacy (CFP)

Below I have put forth 10 issues that I hope we can address in the ACM opening keynote address, which will be a panel on equiveillance; http://wearcam.org/anonequity.htm

Panelists are asked to either challenge (refute), or re-enforce (accept) these 10 predictions of an equiveillant society (see further, below).

I will begin with an introduction to equiveillance in both the abstract and normative sense, and also the practical matters of an equiveillent society, and what I see as the inevitability of equiveillance.

David Brin will respond to these predictions, in a predictive way (i.e. with imagination of what future societies might be like).

Latanya Sweeney will respond to the threats of surveillance and whether equiveillance can keep these threats in check (or whether it merely adds more cameras to the "fire").

Ivan Szekely will respond from the prespective of a state where inequiveillance is rampant, i.e. in the face of individuals lacking rights to access of surveillance data, should they resort to sousveillance of the state? Can equiveillance be a "fuse" or "circuit breaker" to protect us from a totalitarian state?

Surveillance is already the subject of more than 4000 peer reviewed scholarly article references on Citeseer, and is also the subject of an IEEE interntional conference. For a good survey article, see Gavrilla 99, who summarizes surveillance as the art, science, and technologies of "Looking at People". Surveillance is derived from French "sur" (above) and "veiller" (to watch). Typically (though not necessarily) surveillance cameras look down from above, both physically (from high poles) as well as hierarchically (bosses watching employees, citizens watching police, cab drivers photographing passengers, and shopkeepers videotaping shoppers).

Likewise Sousveillance, derived from French "sous" (below) and "veiller" (to watch), is the art, science, and technologies of "People Looking at". Sousveillance does not immediately concern itself with what the people are looking at, any more than surveillance concerns itself with who or what is doing the looking. Instead, sousveillance typically involves small person-centric imaging technologies, whereas surveillance tends to be architecture or enviro-centric (cameras in or on the architecture or environment around us). Sousveillance does not necessarily limit itself to citizens photographing police, shoppers photographing shopkeepers, etc., any more than surveillance limits itself along similar lines. For example, one surveillance camera may be pointed at another, just as one person may sousveill another. Sousveillance therefore expands the range of possibilities, without limitation to the possibility of going both ways in an up-down hierarchy.

With the miniaturization of cameras into portable electronic devices, such as camera phones, there has been an increased awareness of sousveillance (more than 30,000 articles, references, and citations on the word "sousveillance" alone), and we are ready to see a new industry grow around devices that implement sousveillance, together with a new sousveillance services industry.

Here are 10 Hypotheses that I hope we can address in the panel:

Fundamental questions: The Mark of Authentication

Is it reasonable or ethical to support the concept of a mandatory sales tax, or any other form of intervention into the right of two parties to privately engage in exchange of goods or services?

What does it mean to buy or sell?

There has been a recent trend to commodify everything from simply getting information (subscription based services) to the exchange of ideas. Even communication and interacation with others has been commodified. For example, if you want to just check the weather, you end up logging into some service. Public payphones are replaced with authenticated cellphones. Clock towers are replaced with authenticated time servers. To be able to know the time of day then becomes a commercial transaction. For example, the clock in my cellphone will not work if it can't get "service" (authenticate). Is communication (such as exchange of ideas) a form of commerce?

In a world where thoughts and ideas and communications are governed by micropayments, to define most activity as commerce, what should remain legally outside the scope of commerce?

If people help each other (i.e. farmers getting together for a barn raising) is that tax evasion? Should they all go to jail if they don't accept the Mark of Authentication?

If it appears that mandatory sales tax (permission-based buying and selling) leads to an eradication of anonymous transactions, what other forms of society, if any, could exist?

What about electronic toll collection, i.e. the need to engage in commerce in order to cross a bridge, or camp somewhere. Many public parks and even forests have a "fee station", i.e. a need to pay in order to move from one place to another. The global economy has actually built more borders rather than eradicate existing borders. Whether crossing a border, crossing a bridge, entering a forest, going for a swim, or taking a walk in a park, as these become commercial transactions, we need to accept the Mark of Authentication.

Is it possible for a non-commerce society to exist in practice? Would it be attacked by the commerce-based society's armies?

Is commerce necessary to the well being or functioning of a society? Even if it is not, how could a non-commerce society exist in the face of attack by disgruntled tax collectors?

If we're willing to accept the necessity of surveillance, i.e. the end of anonymity and privacy, should we build in a form of sousveillance as well? Should we simply give up privacy without also giving up secrecy. Why should, or should, individuals have to give up their privacy while organizations are allowed to keep their secrecy?

What mechanisms could be used to prevent one or more secretive organizations from corruption in building the surveillance networks?

Should there be some form of ``safety valve'' that allows the surveillance netork to ``break'' if it becomes too corrupt?

If so, how should this ``safety valve'' be constructed? Should it be built so that the surveillance network loses its secrecy, or so that it loses its effectiveness. That is, should the safety valve reveal the perpetrators of corrupt surveillance, or should it simply reduce the efficacy of the surveillance so that people can conduct anonymous interaction when the system becomes corrupt?

Or do we prefer the temporary safety of a Liquiface at the Oceana Beach Resort?

Human safety beach resort lounges might offer interaction through tamperproof computer consoles, consisting of interactive water jets in granite or marble slabs, with displays safely behind thick bulletproof glass. Not that the bulletproof glass would really be necessary since inhabitants would be naked, free of guns, or box cutters. This would be a software only world, all hardware being done only by soldiers. At the safe beach resort, there would be no objects with which to jam up the liquiface, and the only thing the terrorists could do would be to urinate or defecate or spit food particles into the liquiface holes, in which case, a self cleaning action could take place, by increase in water column from 2" w.c. to maybe 33' (10m) w.c.. Authentication and keystroke monitoring of course would keep the soldiers safe from beach resort hackers. A noware sweatshop at the beach resort? All ideas would be welcome as long as they don't threaten the stability of the human safety utopia, however temporarily it would remain utopic.

Wildlife is free to pass through borders without authentication. Birds can fly from one country to another without a passport.

Lifestock must bear the Mark of Authentication in order to pass through borders. Cattle and sheep must be branded, marked, or submit to a biometric database before they are allowed to pass across a border.

Members of the wildlife community are free to help each other, and to form mutually beneficial relationships.

Members of the livestock community are only free to help each other but only if they also offer a portion of that help to their master. In order to facilitate the aforementioned "only if", all manner of help shall be quantized through an organizational mechanism known as "commerce".

Equiveillance is the balance (equilibrium) between surveillance and sousveillance. 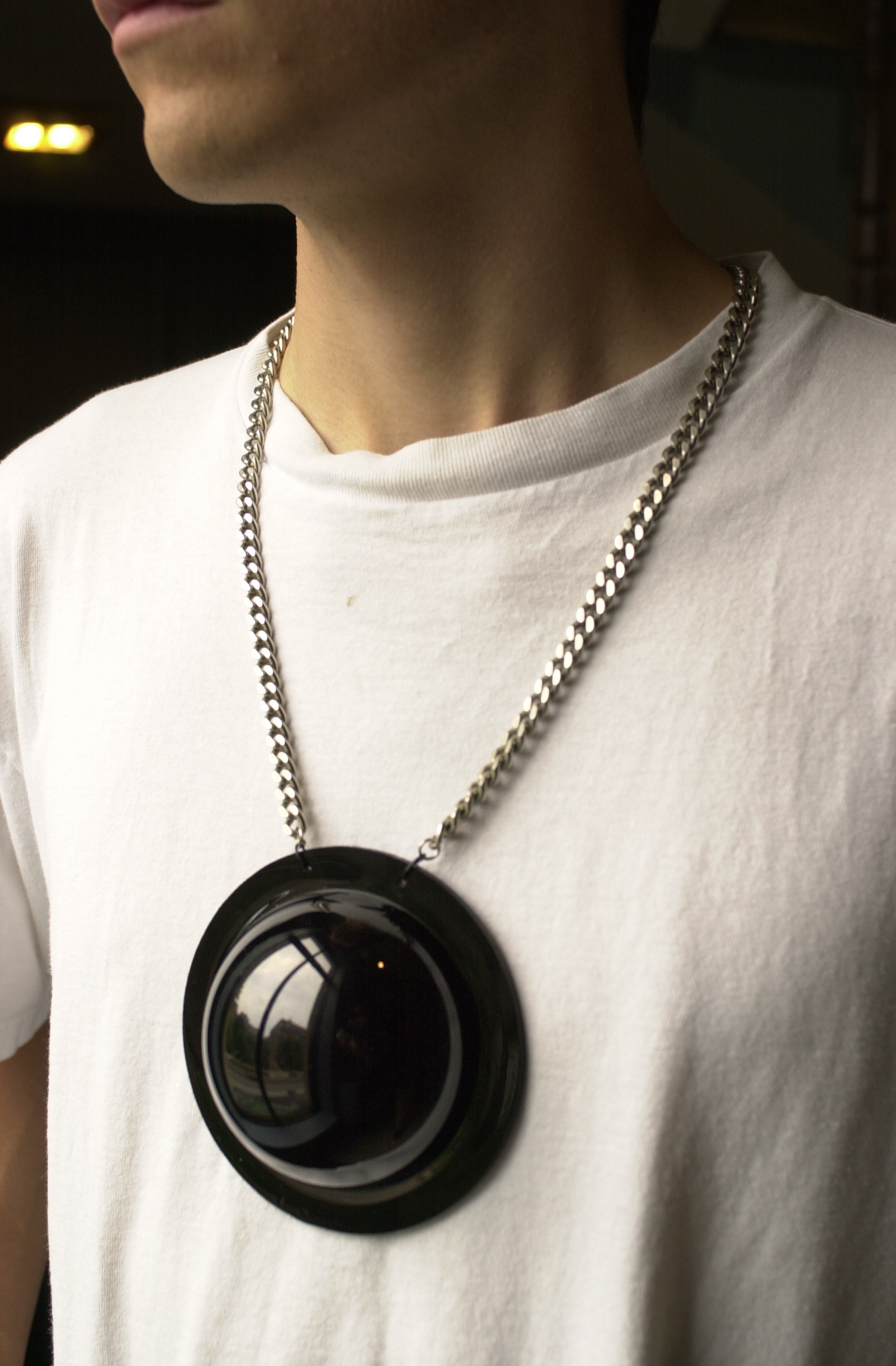 Consider, for example, a balance between the left and right columns in the table below:

A comparison between surveillance and sousveillance

Eventually, we will probably end up with a combination of ubiq/pervcomp (surcomp/souscomp) and wearcomp (sousveillant-computing). There will eventually be some kind of equilibrium ("equivellance") between surveilance and sousveillance. We will wear or carry some but not all of the technology. Obviously we don't wear big batteries to run head-mounted lights, so there are some elements like shelter, lighting, electrical wiring, and plumbing (except for diapers which are wearable restrooms) that are best-served by the architecture. But new emerging technologies of miniaturization will shift the equiveillance (sur/sous equilibrium) a little more from architecture of buildings to human-scale architecure. I believe that the "heavy currents" like the 600 Amp 3phase service that comes into our building will stay in the architecture, whereas the "light currents" (informatic electrical signals) will move more and more onto and into the body. Thus the shift in equiveillance will be primarily informatic, encompassing also personal information like lifelong video capture "cyborglog" personal diaries.

As a society, have we replaced community with reputation capital and money? To the extent that fame and fortune are fungible, and are thus two sides of the same coin, with surveillance, we no longer live in a small town where neighbors work together for a community.

A goal of sousveillance is to bring back that sense of small town community, in contrast to profiling and surveillance. Sousveillance (cyborglogging, etc.) tends to be distributed and less organized, or at least less hierarchical, and thus conducive to a small community in which individuals trust one another. Surveillance, on the other hand, as with profiling, often operates in secret, in the context of larger peer-anonymous communities, thus breeding mistrust, which itself breeds more surveillance, as a vicious cycle. Not to forget, of course, the lack of inverse visibility that can lead to corruption of politicians who use secrecy to hide theft of public monies, and the like, in a surveillance-only society.

Understanding inequiveillance requires us to understand and appreciate that notions of secrecy are very different from notions of privacy, and that if we are to give up privacy, then we must and should also give up secrecy. Conversely as long as secrecy exists, so too should privacy.

As a corrolary to equiveillance, it should be reasonable for a person to keep their own record of their life experience, at least during times when they are under surveillance, so that each person can construct their own account of their own activity. To interfere with a person's own cyborglog would be to willfully destroy evidence that that person might need in the defence or prosecution of legal action. Therefore one who attempts to destroy or inhibit sousveillance should, at the very least, fall under the same kind of suspicion as one who inhibits surveillance.

The author would like to acknowledge the support and help of Ian Kerr, University of Ottawa, the anonequity project and SSHRC.

In revising this article, the author is grateful for some good suggestions made by Dr. Stefanos Pantagis.